The British Viola Society is very proud to have viola student representatives in all of the UK Conservatoires. We are still waiting for further information from our other representatives. Please watch this space.

Guildhall School of Music and Drama 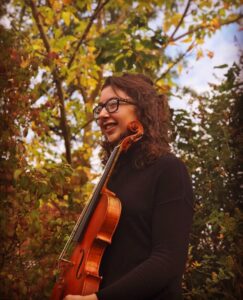 is currently studying with Matthew Jones at Guildhall School of Music and Drama, where she is supported with a school scholarship. During her studies, Kate won the Max and Peggy Morgan Viola Competition in 2018, giving the prize winner’s recital in St Martin in the Fields as part of their lunchtime concert series. Kate has enjoyed a variety of solo performances across the North West of England, performing recitals in Chester, Blackpool and Middlewich. She is also due to open Julian Philips’s birthday concert with his 1995 work, Coronach, for viola and mezzo-soprano in Milton Court Concert Hall.

In 2017, Kate became co-principal viola of the Skallsjö Sommarorkester - an unconducted string orchestra based in Gothenburg. Since joining the ensemble she has been involved in a concert tours of the of Sweden, Norway and Denmark. In January 2018, the orchestra were awarded the Vecci Scholarship, which was presented with a concert in the Göteborg Konzerthaus.

Edward Keenan was born in Scotland. He completed his undergraduate in viola at the Royal Conservatoire of Scotland in 2017. Whilst there he studied with Jane Atkins and Duncan Ferguson and was awarded 1st prize in the 2017 Watson Forbes Viola Competition. He was also awarded the John McInulty Prize for Orchestral String Playing.

Following his undergraduate studies, Edward professionally freelanced with several orchestras in Scotland such as; the Royal Scottish National Orchestra, Scottish Opera and the Scottish Chamber Orchestra. In September 2018, Edward began his postgraduate studies at the Royal Academy of Music with Martin Outram.

Edward is a keen chamber musician and is principal violist of the Glasgow based Broen Ensemble - who were recently awarded a place on the prestigious Tunnell Trust. He is also the violist of the London based Corran Quartet - who are about to undergo a complete cycle of Beethoven string quartets throughout the centenary year of 2020. 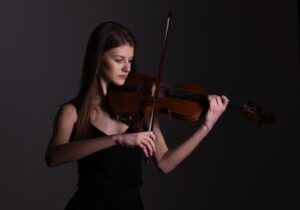 She began playing the viola aged 11, and is a long time pupil of Alison Kay (ex Co-Principal Viola, Bournemouth Symphony Orchestra). In 2014, she became a member of the National Youth Orchestra of Great Britain, and was appointed their principal viola two years later.

As well as orchestral playing, Helena is an experienced soloist and chamber musician, with recent performances including Telemann’s Viola Sonata in G major and Mozart’s Sinfonia Concertante. 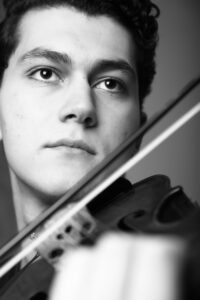 Peter Fenech is a Maltese born violist currently in his fourth year of undergraduate study at Trinity Laban Conservatoire of Music and Dance, learning with British violist Roger Chase. He began studying a Trinity Laban in 2016 where he was offered the Ludwig Lebell Scholarship & Peter Fuller Holden Scholarship for Viola for his first year of study. In 2017 he was awarded the Band/Kurtz prize for Viola by the head of the strings department Nic Pendlebury.

Throughout his time at Trinity, Peter has performed in numerous orchestral projects and notably in side-by-side performances with members of the BBC Symphony Orchestra, the Philharmonia and the Bournemouth Symphony Orchestra.

Aside from the orchestral works, Peter has performed chamber concerts alongside professors including cellist Richard Markson and Head of the keyboard department Sergio De Simone and more recently in a side-by-side performance with violinist Stephanie Gonley.

Whilst being at Trinity, Peter has had the opportunity to perform in masterclasses with Jonathan Barritt, Aleksandar Milošev, Alexander Zemtsov and with British virtuoso Lawrence Power, learning a great deal about the role of the violist on soloist platform.

In the summer of 2018, Peter was the principle violist in the National Youth String Orchestra under maestro Damian Iorio performing works by Arvo Pärt and Strauss’ Metamorphosen.

This year, Peter is writing for the British Viola Society newsletter where he updates the society on the upcoming viola related events occurring at Trinity Laban.