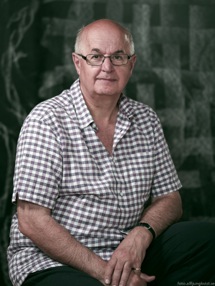 From the age of 8 I was a choirboy at St Anne’s Moseley, before transferring, in 1959, to St Martin’s in the Bullring where I sang for 10 years (last 5 as a Baritone). I also sang in Birmingham Choral Union and the City Choir in numerous concerts in Birmingham Town Hall.

On leaving School in 1966, I worked for W H Smith for 18 years until 1984. I first moved to Great Malvern in 1968 where I sang in the Malvern Choral Society and the Worcester Festival Choral Society where we performed in Worcester Cathedral under Christopher Robinson.  In 1971, I moved to Pembroke Dock where I sang in ‘Cor Meibion Penfro’ (Pembroke Male Voice Choir) for four years. From 1975 – 78, whilst working for WHS in Windsor, I sang in Slough Parish Church Choir, Windsor and Eton Choral Society and The Windsor Festival Chorus. Concerts either took place at Eton School Hall or St George’s Chapel, Windsor Castle. Whilst in Windsor I also sang in concert performances of two operas – Magic Flute and Fidelio.  On moving to work in central London in 1978 I had to give up my choral singing due to lack of time and work pressure.

I returned to the Birmingham area in 1985, after leaving WHS, to help look after my Father. I worked in various locations in accounts management before being made redundant in 2009 and taking early Retirement. For two years, until I had to give up through work commitments, I sang with the first year students at the Conservatoire in concerts in the Adrian Boult Hall – They needed help back then!
Music has been central to family life since my childhood and before my parents met. My father, pre WW2, was a cellist in a family quartet, taking lessons from Johann Hoch who was the founder principal Cellist in the City of Birmingham Orchestra and who taught cello at the School of Music from the Turn of the Century to the 1930’s. My mother was a violinist from a young age and during WW2 played with staff and students of the School of Music until her marriage in 1946. She was taught by T Henry Smith, a Fellow of the BSM.  Mum played in an amateur orchestra after the my Brother, Sister & I started school, until she was in her mid 70’s.

The first concert I know I attended was in the Town Hall in 1963 (I still have the programme) and since then have attended 800 concert in the Town Hall, over 2,500 in Symphony and over 1,100 at the Old Conservatoire and 300 in the new building.  I have a passion for Opera having attended Covent Garden over 460 times and have so far, seen 350 different operas live. Overall I have been to over 7,000 performances of concerts and operas.  Now that I have retired I particularly enjoy the concerts at the Conservatoire watching the students progress through their time there.   I also collect signed photographs of performers, which now number over 2,500.
Other than music, my main hobbies are watching Cricket at Edgbaston, Rail Travel – particularly in Scandinavia (My sister has lived in Sweden for 40 years) and Genealogy, having traced my family back over 1,000 years.  My biggest shock was a few years ago finding that I was 18th Cousin to the Earl of Wessex (Conservatoire Royal Patron), although it would be difficult to find any blue blood, even under a microscope!
BRITISH VIOLA SOCIETY: MENU