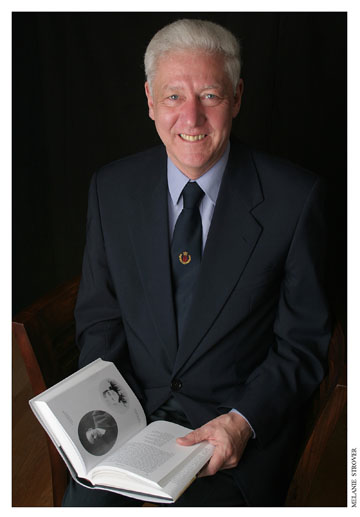 John White was associated with the Royal Academy of Music for four and a half decades. During his national service he was awarded a scholarship to study with Watson Forbes. He became a sub-professor and later professor of viola and Head of instrumental Studies. He was president of the RAM Club from 2001-2002 and artistic director of a three-day tribute to Lionel Terlis during that period.John was a founder member of the Albemi String Quartet (recording for Saga and Argo) who premièred Frank Bridges Rhapsody Trio at the Aldeburgh Festival in 1965 and quartets by Alan Rawsthome (no. 3) and Nicholas Maw (no. 1). He was a member of the Stader Trio (clarinet, viola and piano), London Philharmonic Orchestra and London Mozart Players. A number of composers have written works for him including Michael Berkeley, Kenneth Harding, Gordon Jacob, Elizabeth Maconchy, Alan Richardson, Francis Shaw, Richard Stoker, Graham Williams and Geoffrey Winters.

He was viola tutor to both the European Union Youth Orchestra and the Gustav Mahler Youth Orchestra and was the first British violist to be invited to give master classes at the Beijing Conservatory in China. In 2000 he was a member of the jury at international viola competitions in Turkey and Kazakhstan and has twice been on the panel for the William Primrose International Viola Scholarship in Canada and the USA He was a jury member for the ﬁrst and second Alessandro Rolla International Viola Competitions held in Maastricht, Holland in 2006 and 2008.

John White was host chairman at four international Viola Congresses held in the UK since 1978 and has participated in other congresses in France, Germany, Sweden, Canada, USA and New Zealand. For over thirty years he was a member of the executive committee of the prestigious Lionel Tertis International Viola Competition and Workshop and was a member of the jury for the 1994 competition. He is an honorary member of the American, Welsh, Canadian and Australian/New Zealand Viola Societies and in 2008 was elected the first Honorary President of the English Viola Society. His book, An Anthology of British Viola Players(Comus Edition), was successfully launched in 1997 and in 2006 he completed his second book, Lionel Tertis, the first great virtuso of the viola,which was published to coincide with the 130th anniversary of Tertis’s birth. This was published in paperback by Boydell & Brewer in November 2012. His third book, Those Were the Days – A Yorkshire Boy’s Cricket Scrapbook (Christopher Saunders Publishing) was published in October 2013. He continues to edit interesting and neglected viola works by British composers. Corda Music have published Concert-Piece for viola and orchestra by Gordon Jacob, B.J. Dale’s introduction and Andante for six violas and works by William Alwyn, Minna Keal, William Wolstenholme and Kenneth Harding.For Josef Weinberger he has edited a number of works by York Bowen including his Viola Concerto which was written for Lionel Tents in 1908. Comus Edition publish John White‘s editions of a number of works by Alan Richardson and a series of Lionel Tertis‘s original works and arrangements. In 2006 he compiled and edited three Lionel Tertis albums, (two published by Comus Edition and one by Josef Weinberger).

John’s passing in December 2013 left an enormous chasm in the viola world.

Publications in 2012 included his editions of the following:

Those Were the Days
A Yorkshire Boy’s Cricket Scrapbook

As a boy John White lived in Royston, the same West Riding village as Norman Yardley, and getting the autograph of the Yorkshire captain was the start of his life-long fascination with Yorkshire cricket and its characters. With a foreword from Yardley’s son Ed and photographs from the Yardley albums, this unique book takes us from the author’s childhood in Royston, with much about Norman Yardley’s life and career, to his exile in the south. It continues with a potted history of Yorkshire cricket, illustrated with over 800 items from John’s personal collection of pictures, photographs, postcards, press-cuttings, books, and his first love, cigarette cards.….

Read a review of the book here.

Orders can be placed via the Cricket books website or by emailing: sales@cricket-books.com or by phoning (01594) 516030.